The SIQT examined the number of patents granted to companies based in Switzerland between 2017 and 2019 across all segments on the basis of the CPC (Cooperative Patent Classification) international patent classification system. Those chosen to receive the awards were companies or research institutions with an above-average score in their segment and/or in a CPC class. Among the winners of the Innovation Award was Jansen. The Innovation Award was given primarily for the geothermal probes JANSEN hipress and JANSEN shark. Several patents were registered in 2017 and 2019 for these innovative probes. As the winner of the German Innovation Award Gold and the European Geothermal Innovation Award for the JANSEN hipress, as well as the ISH Architecture + Technology Innovation Award for the JANSEN shark, Jansen is the most innovative geothermics company in the industry. This demonstrates the pioneering role that Jansen plays in the geothermal energy market with regard to safety, connection technology, diffusion resistance, and efficiency, as well as the progress the company has made in becoming the global market leader in this field.

JANSEN hipress was developed in collaboration with the ’Institute for Materials Technology and Plastics Processing’ (IWK). The patented geothermal probe with a pressure resistance of up to PN 35 is the answer to the challenges facing man, material and machine. Because it can be used at depths of up to 500 metres, it can handle higher levels of pressure and more complex geological conditions.

The design of the flow-optimised JANSEN shark is based on research conducted in collaboration with the ‘Institute for Energy Technology’ (IET). It presents substantial cost savings owing to the fact that the circulation pump uses less energy and thus the thermal pumping system is more efficient. Research into the bionics behind the JANSEN shark was conducted in collaboration with Bionic Surface Technologies in Graz, Austria. In fact, bionics is the key to the performance of the probe – by designing the surface to imitate nature, it was possible to reduce pressure loss in the system. As well as winning the Innovation Award mentioned above at the ISH 2019 – the world’s leading trade fair for water, heating and climate – in 2017, the JANSEN shark technology was nominated for the European Geothermal Innovation Award.  In further cooperation with the IET, extensive research was carried out on the JANSEN powerwave geothermal heat exchanger.

The best in performance and safety

Compared to conventional geothermal probes, the JANSEN powerwave systems record measurably higher geothermal transfer capacities and higher energy storage volumes. The structured surface of the corrugated pipe provides tight, reliable grouting under pressure, which ensures better vertical borehole sealing. Here, too, the JANSEN powerwave geothermal probes come out on top, scoring top marks in the independent research project EWS-Tech 2017, which was funded by the Baden-Württemberg Ministry for the Environment, Climate and Energy. The combination of maximum performance and exceptional safety benefit the system over the course of its long service life.

This innovative geothermal probe achieves whole new dimensions in geothermics. The most powerful geothermal probe in the world, it has the lowest hydraulic resistance in relation to the required installation diameter. This is achieved through a specially developed multi-layered structure made up of PE metal. The high-pressure geothermal probe also boasts an impressively high thermal transmission capacity and absolute diffusion resistance. The probe is able to stand the highest pressure loads and the harshest construction site conditions, and thus facilitates the cost-effective development of powerful, clean and renewable energy storage systems up to a depth of 500 metres. The geothermal probe has been awarded three prizes. It won ‘Gold’ in the 2019 German Innovation Award, with the jury declaring that “The innovative JANSEN hipress has the lowest hydraulic resistance and is currently the most powerful geothermal probe on the market. And it achieves this without having to increase the installation diameter, which also has a positive impact on drilling costs.” In the same year, hipress also won the equally prestigious Ruggero Bertani European Geothermal Innovation Award, and recently won the 2020/21 Innovation Award from the Swiss Institute for Quality Tests (SIQT).

Thanks to intensive research in the field of fluid mechanics, Jansen has now increased the efficiency of geothermal systems to a whole new level. JANSEN shark is a technology based on cutting-edge bionics and a prime example of what can be achieved through the sophisticated combination of nature and technology. The material imitates the surface of a shark’s skin, which has a natural drag-reducing effect. The plastic surface structure on the interior of the pipes is therefore optimally adapted to the flow behaviour of the circulating brine medium and thus helps to significantly reduce the hydraulic resistance. The patented surface structure has a particularly beneficial effect on pressure loss throughout the system. In concrete terms, the amount of loss can be reduced by 7% compared to conventional, smooth tubes, which results in a reduction in a 10–15% reduction in power consumption for the circulation pumps. Thanks to its smart pipe technology, the new generation JANSEN shark far exceeds the performance values of the conventional geothermal systems that came before it. As well as the increased efficiency of the circulation pumps – which, in turn, reduces operating costs – the technology has positive implications for the overall investment costs, as it allows the use of smaller pipe diameters, making drilling and installation quicker and easier. This innovative technology is used in the geothermal segment for geothermal probes, horizontal collectors and connecting lines.

A wide range of geothermal solutions can be implemented with JANSEN powerwave, such as geothermal probes, geo-exchange baskets or even surface and trench collectors. It has been confirmed by various practical evaluations that geothermal systems with the patented JANSEN powerwave corrugated pipe technology offer the highest level of performance. The internal corrugation creates a turbulent flow in the brine medium – even at very low flow velocities – and thus improves the heat transfer. The huge storage capacity allows for an optimal heat exchange with the earth and significantly increases the effectiveness of the heat pump. JANSEN powerwave corrugated pipes thus enable the construction of cost-effective geothermal power plants – with money saved in both the construction and operation.

With the JANSEN powerwave coax, Jansen offers a very slim and efficient coaxial probe, which is particularly suitable for small borehole diameters and alternative, cost-effective installation methods with a small device.

The JANSEN powerwave single-u is extremely powerful. The energy required from the substrate can also be transmitted using fewer and/or shorter probes. This results in considerable savings in the construction of the geothermal system: shorter boreholes, fewer connecting lines, and smaller manifold systems.

The JANSEN powerwave collect trench collector, ideal for heating and hot water, offers the benefit of lower investment costs and less space compared to conventional horizontal collectors. The placement of the collector very close to the surface ensures constant regeneration and eliminates the geological risks associated with installation.

In November 2020, the independent ‘Schweizer Institut für Qualitätstests’ (Swiss Institute for Quality Tests; SIQT) handed out the Innovation Award 2020/21 for the first time to around 900 Swiss companies from the entire economic spectrum. The awards were presented on the basis of the hardest «currency» of innovation – the patent. 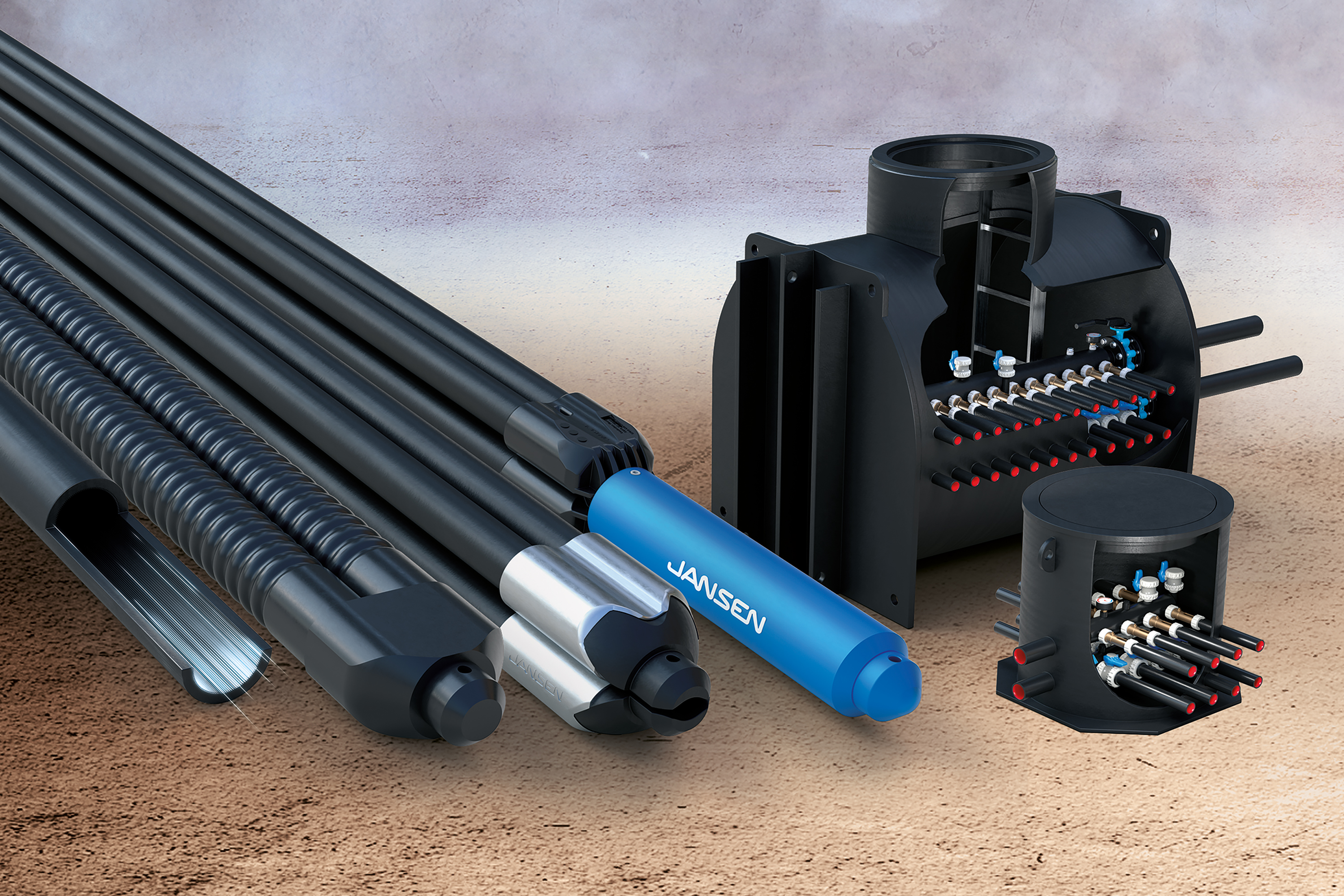