An extension as a style bridge

Worlds collided during the renovation and conversion of a historic residential building in the Zurich district of Wipkingen. However, the coherent approach adopted by AMJGS Architektur enabled these worlds to be reconciled to create a harmonious whole. The multi-storey extension made of glass, which was implemented in a unique style by Baur Metallbau AG using Janisol Arte 2.0 steel profiles, plays a key part in this.

The aim of the building owner, Niklaus Leuthold, and the architects from AMJGS Architektur was to implement a renovation as close as possible to the original condition of this building in the clinker brick style, which is classed as worth of protection, while increasing its residential value at the same time. The building, which was built in 1891 in the «Gründerzeit» style, had been rebuilt and expanded several times over the years. Various extensions were added to it in the 1930s and 1940s. While the exterior largely retained its original look, the interior was gutted in the 1970s and adapted to the style of the time.

During the renovation, particular attention was paid to using historical materials, construction methods and details that were as authentic as possible. The architects were inspired by historical examples from the same period of construction and the surrounding area. Elements that ensure comfort and energy efficiency, such as windows and doors, were created new using the historical examples as a template. However, they were given original details such as box locks and rod locks.

When extending the building, an alternative to the original part built using solid bricks was to be created, ideally using glass. The starting point for the building was the client’s desire to create the house as a communal housing project. This prompted the search for a way for all three apartments, positioned one on top of another, to be directly connected to the garden and each other. Through the close cooperation with the heritage conservation authorities, it has been possible to create something that is in keeping with the historical period in which it was built and yet has its own independent identity. In line with the architects’ intentions, the extension made of steel and glass took inspiration from historical sources and then interpreted them in a unique way. «Its façade was to have small-scale window areas, which can be implemented very easily with the Janisol Arte profile from Jansen. It’s a great product, but you also need a metalworker who knows exactly how to handle it», Sandra König and Anja Meyer from AMJGS Architektur explain about the extension and the cooperation with Baur Metallbau.

It's façade was to have small-scale window areas, which can be implemented very easily with the Janisol Arte profile from Jansen. It’s a great product, but you also need a metalworker who knows exactly how to handle it.
– Sandra König and Anja Meyer from AMJGS Architektur explain about the extension and the cooperation with Baur Metallbau.

The extension was ultimately created through a process of borrowing from historical industrial buildings. The idea was to give it the feel of a workshop and the buildings of Jean Prouv and Zurich subcultures of the last three decades served as inspiration here. 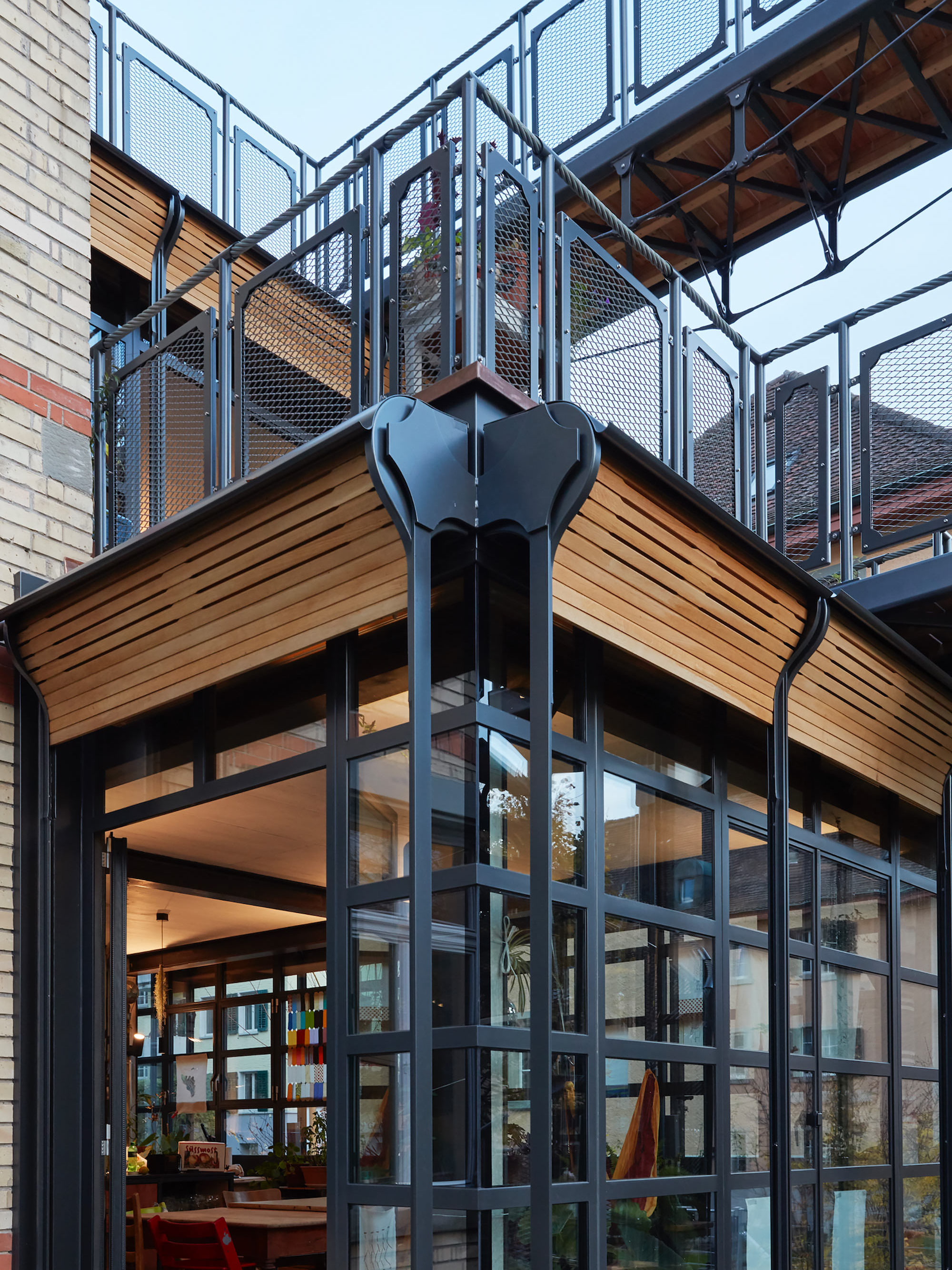 In this context, Janisol Arte 2.0 perfectly meets the brief of gently and aesthetically transforming a listed building into a comfortable contemporary living space.
The industrial-style extension provides an effective contrast here. It houses a kitchen constructed from steel and wood that visually underscores the workshop feel.

Today, the old building shines again with the inviting cosiness of light wooden floors, white walls and doors, patterned tiles and the warm tones of clinker bricks. The industrial-style extension provides an effective contrast here. It consists of raw steel girders, varnished concrete ceilings and huge panes of glass. In this context, Janisol Arte 2.0 steel profies perfectly meet the brief of gently and aesthetically transforming a listed building into a comfortable contemporary living space. The intricate window system is particularly well suited for individually reconstructing historical windows. The narrow profie face widths of just 25 or 40 millimetres with fixed glazing and an installation depth of 60 millimetres can be used to produce delicate yet robust designs with a high proportion of glass and excellent thermal insulation.
The system makes it possible to construct inward and outward-opening windows as side-hung, double casement, bottom-hung or top-hung windows and fixed glazing in panel sizes up to 1000 millimetres wide x 2400 millimetres high (max. 150 kg/casement). Special opening types such as drop-down windows, pivot windows and sliding windows are also possible. It was these possibilities that helped to persuade the architects and the building owner to use this system.
The integrated kitchen serves as a living room and a visual link between the old and the new. It is constructed from steel and wood and emphasises the feeling of being in a workshop. Following its refurbishment, the residential building, which was built during the «Gründerzeit» period, once again has its original look from the end of the 19th century, but also meets today’s requirements with regard to comfort. In the multi-storey glass extension, all requirements are successfully met in a way that delivers outstanding design quality. (NS)
project details